Audacious was the word used by editor/author Rick Marshall to describe J.C. Lamont's vision for The Chronicles of Time. To this day, that still strikes me as the most apropos term.

For those who have not been introduced to these incredible novels, allow me to lay the groundwork: The concept was to show the entire history of time, from Creation to the New Jerusalem, through the eyes of Michael the Archangel. The framework is biblical, but Lamont draws upon innumerable primary sources to ground people in the actual historical context of the entire story. Thus, as you read, you will be drawn into the world in a way you never have. People who read the first volume, Prophecy of the Heir, have said that it changed the way they read the Bible. If Frank Peretti had written The Lord of the Rings, it might have come off a bit like The Chronicles of Time. 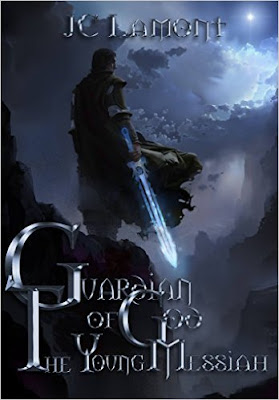 Lamont is still writing this ambitious eight-book, four-volume series, but has decided to give us a special look into first half of the second volume. Though the majority of the novel is drawn from Vol. 2: Covenant of Blood (unpublished), Guardian of God: The Young Messiah is a unique standalone presentation of a portion of Vol. 1 and Vol, 2. Titled and published to coincide with the release of the controversial movie, The Young Messiah (based on the Anne Rice novel, Christ the Lord: Out of Egypt), it takes the reader from the birth to the baptism of Christ, and some of the more foreign terminology and fantasy nomenclature from Prophecy of the Heir has been simplified for new readers.

Most "life of Christ" novels are written with a minimum of context, as if the Messiah simply dropped into a vacuum of history with the Roman Empire as a vague setting, nothing more. In Guardian of God: The Young Messiah, we see the historical and spiritual machinations behind getting the familiar players onto the stage.

From the Amazon description:


No other life of Christ book digs into Jewish history to unravel the answers to these and many other questions. Written by Christian apologist and historian, JC Lamont, this novel features a 14,000+ word appendix. Source materials, other than the Bible, include Josephus, the Dead Sea Scrolls, the Targum (a first or second century BC Aramaic commentary on the Old Testament read in the synagogues in Jesus' day), and works by first century AD Roman historians such as Cassius Dio, Suetonius, and Tacitus.


With stellar cover art by Caleb Havertape, Lamont's Guardian of God: The Young Messiah is sure to attract a whole new generation of readers.

Bid the Gods Arise (The Wells of the Worlds, #1)

Reviews for Bid the Gods Arise